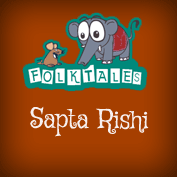 The Saptarishis, meaning ‘seven sages’, are the seven rishis who are extolled in Hindu mythology. Due to their yogic powers and powers of penance, they are said to have attained semi immortal status— they have an extremely long life span.

Saptarishis are the hierarchy working under the guidance of the highest creative intelligence, God.They are naturally the most evolved light beings in creation and the guardians of the divine laws.

The sages are Vashishtha, Marichi, Angirasa, Atri, Pualsthya, Pulaaha and Krathu. They all revolve around the pole star, Dhruv.