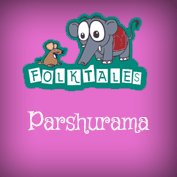 Parshurama is the sixth avatar of Lord Vishnu. His father was a great sage. In fact, he was one of the seven Maharishis. His name was Jamadagni. Parshurama’s mother was a Kshatriya princess, Renuka. He had four brothers, and was the youngest of all of his brothers was named Rama. Rama had qualities of both a Brahmin and a Kshatriya. He was a fierce warrior and an ardent devotee of Lord Shiva. He is called the first Brahmkshatriya. Through his devotion to Lord Shiva, he was successful in getting a parshu (a weapon) as a boon. And hence he was named Parashurama meaning ‘Rama with parshu.’

Parshurama’s mother was known for her devotion to her husband. Her love for him was such that she used to carry water even in a wet clay pot. One day when Renuka was carrying water back home she got distracted by Ghandharvas for a second, and as a result, the wet clay pot broke and the water fell. When Jamadagni got to know about the incident, he was furious and ordered his eldest son to behead his mother. His scared son refused to do so and was turned to stone by his father. Then, Jamadagni ordered his second, third and fourth sons to behead their mother but when all of them refused, he turned them all to stone. Finally, he asked his youngest son,Parshurama to behead his mother.

Parshurama, being a loyal son, beheaded his mother. Impressed by Parshuram’s devotion, his father granted him a boon. Parshurama asked his father to bring his mother back to life and turn his brothers back to humans, Jamadagni fulfilled his son’s request and his wife and sons came back to life.

Maharishi Jamadagni and Renuka were also blessed with a wish-fulfilling cow, Kamdhenu. One day when Jamadagni was out, a few Kshatriyas came to his ashram searching for food.They were surprised to see Kamdhenu and offered to buy it but Renuka refused to sell it. The Kshatriyas felt offended and stole the cow. Angered, Parshurama killed the Kshatriya king Sahsrarjun and his entire army and brought Kamdhenu back home. King Sahsrarjun’s son murdered Jamadagni to take revenge. Parashurama found 21 scars on his father’s body and took an oath to kill all the unjust Kshatriyas 21 times. He wiped out all sons of King Sahsrarjun.

Parshurama is also seen as a great teacher. He trained many important characters of Mahabharata like Karan, Bhishm Pitama, and even Dronacharya. He is one of seven Chiranjeevis (immortals) and will also train Kalki, Lord Vishnu’s tenth and last Avatar.

Parshuram gave up fighting to become a Sanyasi and it is believed that he has taken refuge in Mahendra Mountains in Odisha till he is needed to train the Kalki Avatar.

For other interesting stories for kids, go to: https://mocomi.com/fun/stories/