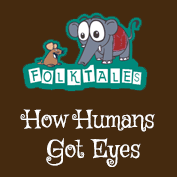 Retold from ‘When the World was Young’ by Verrier Elwin

God created human beings and gave them different features. However, God had forgotten to create eyes for the humans to see with. Life was very difficult. People could not see anything and most of the times, got hurt by tripping and tumbling over each other. People couldn’t see what they were eating, where they were going or whom they were meeting.
Years ago, the earth was very beautiful. It was blessed with beautiful flowers, colourful birds and butterflies, lovely green forests and musically flowing streams. However, all this seemed a waste as human beings did not have eyes and could not see any of these.

Human being became sadder day by day. They could neither work properly nor live comfortably. They fell sick often and died early.

One day, God decided to pay a visit to the world he created and find out how his people were. He was sad to see that so many people were unhappy. They were tripping and tumbling and wasting their lives in vain. He realised that all this was happening because they did not have eyes and decided to find eyes for his people, but he did not know from where.

While passing along a stream, God suddenly noticed a large crab with huge eyes. He immediately decided to grab it and take its eyes, but the crab would not let him do so. It bit God’s finger really hard and ran into its hole.

Once again, God started looking for eyes. When he entered a forest and saw an owl sitting on a branch, he saw its big round eyes and was determined to take them for human beings. The owl got frightened as God came near, and flew away immediately. God then realised that it was unfair to snatch the eyes of some creatures to gift them to others.

Exhausted with his search, God was tired and dozed off under a tree.

On one of the branches above God’s head, sat a crow eating plums. “Plock plock plock,” came the sound and God woke up at once. He saw the seeds of the plum falling on the ground. He picked them up and said, “These would make perfect eyes for the humans.”

He fitted the seeds on the human beings to make eyes. People could now see the world and life became easier than before.

But there was still one problem: people did not have any eyelashes or eyelids. Even when they slept, their eyes were still wide open. It was a very confusing situation.

Once, the water sisters came to visit a human family at night. They were surprised to find out that the human family, who they were friends with, did not even greet them. They simply stared with their eyes open. They felt humiliated and decided never to visit the family again. They did not realize that the family was fast asleep. After all, their eyes were open, whereas the water sisters had eyelids and lashes and slept with their eyes shut. They waited till the morning and then left the house.

The next morning they realised the real reason behind family not greeting them and decided to find eyelids and eyelashes for them. They went to the forest and got hold of a peacock. They carefully took out the feathers from the peacock’s tail and fixed them on the eyes of their friends to make eyelashes.
Since then, people could move their eyelids, and they could also shut their eyes when they were asleep.