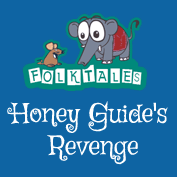 One day, Gogo and her grandchildren were feasting on some delicious honey. Sibonelo, one of Gogo’s grandchildren, had collected some honey with the help of a honey guide.
“I hope you have given the little bird her due share,” asked Gogo.

“Yes Grandma, I would never cheat the Ngede of his due portion.” Sibonelo knew that the little honeyguide bird named Ngede would search for a human whenever she found a beehive which was filled with honey. Though Ngede was not particularly fond of the honey, he loved eating the wax and the bee grubs from the nest. “I remember the story of Gingile who cheated on Ngede and took all the honey for himself.”

“Oh well, then why don’t you tell the story to everyone,” Gogo said to Sibonelo.

“Alright, I will,” Sibonelo said and started the story.

“There once lived a selfish young man called Gingile. He was very greedy and never wanted to share anything that he had. Whether he had a good hunt or a good harvest of corn in his own small garden, he never shared a piece with anyone.

One morning, Gingile was out for hunting when he suddenly heard the honey call of Ngede. Gingile was tempted at the thought of fresh honey. He could almost smell the aroma in his imagination. He searched everywhere until he found the bird on one of the branches of a tall tree. “Chik Chik Chik,” came the sound of the little bird. Ngede noticed that Gingile was following him. Flying slowly, he started moving towards the branch on which the bees had built their nest. After a good forty minutes, Ngede finally sat on a branch and looked down at Gingile. Gingile understood the signal of Ngede. He was sure that Ngede had found the nest. After all, Ngede always lived up to his reputation of finding the beehives with the most delicious honey. Gingile quickly gathered some leaves and twigs and a piece of a branch. He put them together and lit a fire. Once the flame started burning properly, Gingele picked up the burning stem and started climbing up slowly till he could finally see the glimpse of the beehive.

Gingile was now close enough to hear the buzzing of the bees. “Ah, I can’t wait to taste the sweet honey,” he said to himself. He reached the top and thrust the burning stem into the bee hive. All the bees rushed out of the hive. Some even stung Gingile, but he was too concerned about the honey to even feel the pain of the sting. After most of the bees left, he put his hand into the hive and took out the huge honey comb stuck with thick white grubs. He carefully dropped the comb into the pouch that he carried around his neck. Then he climbed down slowly.

Ngede was anxiously waiting for Gingile to come down. As Gingile walked toward the forest, Ngede followed him carefully, waiting for him to drop a big chunk of the honey comb as a thank-you token. After all, she loved the sweet and waxy comb. After a while, Ngede got impatient and started chirping indignantly. She flew and landed on a rock that lay just before Gingile’s feet. Ngede started making noises and looked up at Gingile in anticipation. Gingile simply laughed at the little bird. “You really think I will give you a share of my spoils? What did you even do to get this? I have done all the hard work to get my share of this deliciously honey. Please go and look somewhere else for food,” Gingile said and went away from there.

Ngede felt betrayed and decided to take his revenge.

One day after many weeks, while Gingile was busy cleaning his garden, he once again heard the voice of the honeyguide. Even this time the thought of the wonderful honey filled his mouth with water. He followed the Ngede into the forest and just like last time, it perched on top of a tree, signaling Gingile about the beehive. Gingile quickly lit a small fire and began climbing the branch. Ngede watched him closely from a distance. Gingile climbed up quite a distance but this time he could not hear the sound of the bees buzzing. He continued climbing, imagining about the honey that he was about to get when he suddenly found himself face to face with a huge leopard. The leopard was sleeping peacefully after hunting the entire night. The leopard was immediately awakened by the heat from the stick that Gingile was carrying to burn the beehive. The leopard woke up angrily as she was very tired and was certainly not expecting to be woken up so rudely. She opened her big mouth flashing her large, sharp teeth and growled loudly at Gingile, scarping his forehead with her sharp claws. Gingele was terrified. He immediately lost his grip and fell on the ground with a huge thud, breaking quite a few bones. The leopard was too tired to chase Gingile and went back to sleep. Gingile could barely stand with the impact of the fall, but somehow he gathered strength and ran for his life. But the scar made by the leopard stayed on his forehead forever.

Ngede was successful in taking her revenge on Gingile. Gingile never dared to follow a honeyguide ever again.”