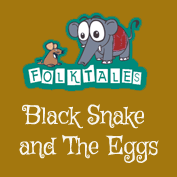 Once, a chicken laid twelve eggs in her nest. She was with her eggs all the time, except for when she went looking for food. One day, when she returned after gathering food, she suddenly realized that her eggs were less in number.

“Oh God! My eggs! I laid twelve eggs and now I am just left with eleven,” she said. Worried and upset, the chicken went looking for the rooster. Just when the chicken left her nest, the thief immediately went inside to steal more eggs. It was a black snake. A freshly laid egg was his favourite meal. He quickly swallowed another egg. It slid down the snake’s throat and the tender shell of the egg was crushed by the snake’s muscles.

The snake was very happy. After all, he did not have to work hard to get his daily meal of delicious chicken egg. All he had to do was to keep a close eye on the chicken and steal her eggs as soon as she went out to get food. Every day, he waited patiently for the chicken to leave her nest.

The chicken finally found the rooster and both of them returned to the nest. “Why would someone steal your egg? You must have made a mistake in counting them,” the rooster suggested. The chicken was however confident that she had lost her egg. She started counting the eggs again, “One, two, three,” and she suddenly screamed out loud. “What is the matter?” asked the rooster.

“I don’t believe this. I just have nine eggs left in my nest,” the chicken said, almost sobbing.
“Who can do this to us?” the rooster wondered.

Both the chicken and the rooster were extremely sad. But the next few days were even worse. The chicken tried spending as much time as possible with the eggs, but whenever she went out to get some basic necessities, she came back and found that one of her eggs were missing.

“There is someone who is keeping a close eye on us,” the chicken said sadly. “He has stolen almost all my eggs, now I am left with just three eggs.”

“Although I am not sure, but I have a feeling that it might be the black snake. He loves eating eggs and stays close enough to keep a close eye on us,” the rooster said confidently.

The chicken shuddered at the thought of the scary black snake eating her tender eggs and her eyes filled with tears. By the time she finished her conversation with the rooster and returned to the nest, the snake had eaten two more of the chicken’s eggs.

“I only have one egg left. Please do something about this,” the chicken said to the rooster.
“We have to put an end to this. I am sure he will come back tomorrow to steal your last egg and this will go on every time you lay eggs,” the rooster replied.

“I know and I am scared. I don’t want to lose all my eggs. What can we do about it?” the poor chicken asked.

“I will make a plan to stop this. We will trap the snake tomorrow, so that he cannot steal any more of our eggs.”

The following morning, the chicken pretended to guard her last egg while the snake watched her from a distance. As soon as the chicken left the nest for a while, the snake slithered into the nest and within no time swallowed the last egg. But this time the snake felt a little different. The soft shell of the egg did not crack and neither did the egg break. The snake started choking gradually, he turned and twisted his whole body to release the egg, but it was stuck. The snake was unable to breathe and gradually, he choked to death.

The rooster came to the nest. He said to the chicken, “I think our problem is solved. No one will ever steal your eggs again. The snake must have died wondering why this egg did not get crushed like the others. After all, it was a hard-boiled egg!”