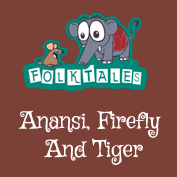 Anansi the spider was friends with the firefly and they were often found together. One day, the firefly invited Anansi to join him for egg hunting. “Please come to my place after dusk and we will go together for egg hunting,” the fire fly said to Anansi.

Anansi reached the firefly’s house late in the evening and both of them went out in search of eggs. The firefly had some idea of where the eggs could be. Every time he went over the field and spread his wings, the place would get illuminated and he could immediately see the eggs lying under the grass. Anansi would immediately pounce and pick up the eggs and put them in his pouch. This continued for a while and every time Anansi would collect the eggs as soon as the firefly spotted them.

Anansi collected many eggs, but did not give a single one to the firefly. When the firefly asked him, he said that he had reached the eggs first so they belonged to him. After quite some time, Anansi was tired of carrying the huge sack of eggs and could barely move. Suddenly the firefly, who was annoyed with Anansi’s selfishness, flew away leaving Anansi in the dark.

Anansi was scared and fumbled in the dark. He had no idea of which direction to go in. Suddenly while walking in the dark he came across a house. He wanted to stay in the house for the night and thought of a trick.

“Dear Godfather, can I come in?” asked Anansi, though unsure of who the house belonged to.
“Who is it?” the tiger asked from inside in his growling voice.

“It is Anansi, your godson,” Anansi answered.

The tiger was angry to hear Anansi’s voice as he had been tricked several times in the past by Anansi. He also knew that he never had a godson. The tiger wanted to teach Anansi a lesson and called him inside his house.

The tiger took the eggs from Anasi and boiled them in a copper kettle. Once the eggs were boiled, the whole of the tiger’s family sat and ate them hungrily. The tiger offered some eggs to Anansi, but Anansi was scared and refused the offer.

Then, the tiger put a huge lobster into the kettle and covered it with some eggshells. He told Anansi that there were more eggs in the kettle and he could eat them if he felt hungry.

At midnight when everyone was asleep, Anansi slowly went to the kettle and put his hand inside the kettle. The lobster pinched Anansi hard and he screamed out loud.

“What is the matter Anansi?” asked the tiger. “Nothing at all, it’s just a dog flea,” Anansi replied.

Anansi was hungry so once again tried to find the eggs and this time the lobster pinched him even harder. He screamed out once again.

“Are you alright Anansi?” the tiger asked.
“I am fine; there are a lot of dog fleas that are biting me,” Anansi replied.

The tiger sat up angrily. “How dare you complain of dog fleas in my lovely house?” he growled and leaped towards Anansi.

Anansi was terrified and ran for his life and never looked back. The tiger stopped at once and smiled to himself as he had taught a lesson to Anansi for tricking him in the past.

Anansi never went in the direction of the tiger’s house ever again. He visited the firefly a few times ,but his wife would always ask him to come later, stating that he was not at home.

Anansi could never find the eggs ever again.

The monkey, the shark, and the washer-man’s donkey

International Folk Tales: How the Dragon Came to be

International Folk Tales: Why the Warthog Goes About on His Knees