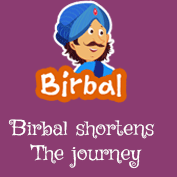 One day, Emperor Akbar and his courtiers had to go to Azabgarh for a meeting. Since it was the peak of summer, they started early in the morning. Azabgarh was situated far away from Akbar’s capital. Akbar was sweating profusely sitting in his palanquin under the scorching heat of the sun. He was exhausted and wanted to shorten the journey somehow.

After some time, the Emperor gave up and said, “I am really very tired of this journey. I cannot bear to sit in the palanquin any more. Is there someone who can shorten this road for me?”
All the other courtiers were dumbfounded as there was no short cut to reach Azabgarh and they could not possibly shorten the road.

At that moment Birbal replied, “Yes, Alampanah! I can!”

The Emperor was happy and relieved to hear Birbal’s reply.

“Alright then do it”, Akbar said.

“Definitely sir, but you have to listen to a story,” Birbal said.

“We have reached!”exclaimed the Emperor with excitement.

To this, Birbal replied “Yes we have sir, you asked me to shorten the path for you, so I did it. You were so engrossed in the story that you did not come to know when you reached your destination.”

Akbar was very pleased with Birbal’s way of entertaining him and showered expensive gifts on him.