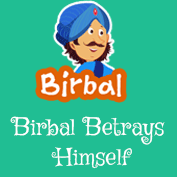 One day, Emperor Akbar got so offended by some comment of Birbal that he ordered him to not only leave the court, but also the city of Agra, his capital. Birbal was terribly hurt and left the city with a heavy heart.

Soon Akbar started to find his royal court dull and lifeless without the vibrancy of Birbal’s wit and humour. He desperately wanted him back in the court but did not know about his whereabouts. Nobody else in the court knew where he was.

One day, the Emperor had a brainwave. He announced that he will give one thousand gold coins to anyone who will come to his court in half sun and in half shade.
Some people came holding a cloth over their heads; some were carrying a wooden board over their head. But, none was able to stand himself before the Emperor, exactly half in sun and half in shade.

Just then, a villager came carrying a string cot over his head and claimed the prize money. He said, “Jahanpanah, I stand before you in half sun and in half shade.”
Akbar understood that the naïve villager could not have thought of this bright solution himself. On interrogation, he confessed that this idea was suggested to him by a man who was living with him.

Akbar was very happy to hear this as he knew it could be only Birbal. Immediately, he sent his men to call Birbal and they had a happy reunion.

For other interesting short stories for kids, click here.