You Are Here : Home » Fun » Stories » Akbar-Birbal » Akbar Birbal: Why is the Camel’s neck crooked 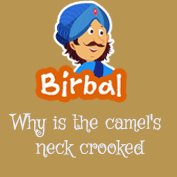 Emperor Akbar was immensely impressed with Birbal’s wisdom and greatly enjoyed his quick wit. One fine day, the Emperor got exceptionally pleased by Birbal and promised to reward him with many expensive gifts. However, several days passed and yet the Emperor did not give anything to Birbal. Birbal was very disappointed with the king for not keeping his promise.
One day, when Akbar was strolling down the bank of Yamuna with Birbal, he happened to notice a camel sitting there idly. A strange query came into the Emperor’s mind and he asked Birbal, “Tell me Birbal, why is the camel’s neck crooked?”

Birbal thought for a while and then replied, “Your Majesty, perhaps the camel has forgotten to honor his promise made to somebody. It is mentioned in our holy books that those who break their promises get punished with a crooked neck. I believe that it is for this reason that the camel has a crooked neck.”

Akbar soon realized that he had also not fulfilled his promise to give some gifts to Birbal. As soon as they arrived at the palace, Emperor Akbar gave Birbal all the expensive gifts that he truly deserved.

This is how clever Birbal got what he wanted, without even asking for it.