You Are Here : Home » Fun » Stories » Akbar-Birbal » Akbar Birbal: Who is The Donkey 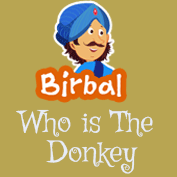 One fine day, Emperor Akbar, accompanied by two of his sons and his clever minister Birbal, went to take a bath in the river. Akbar and his two sons took off their clothes and asked Birbal to take care of them while they bathed in the river.

Birbal stood at the bank of the river, waiting for them to come out. He had put the achkans of the Princes and the Emperor over his shoulders and was finding it difficult to stand straight because of their heavy weight. Looking at Birbal’s condition, Akbar felt like teasing him and said, “Birbal, at this moment you look like a washer man’s donkey loaded with clothes.”

At once Birbal retorted, “You are right, Jahanpanah! I am carrying the load of not one donkey, but of three donkeys.” This witty reply of Birbal left Emperor Akbar speechless.

Can you guess what Birbal meant by ‘Three donkeys’?