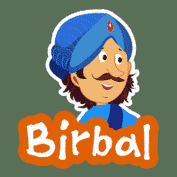 Akbar’s court was famous for the witty question answer sessions between the Emperor himself, and his clever minister Birbal.

On one such occasion – Akbar asked his courtiers whether they could tell the difference between truth and untruth within three words. All the courtiers started racking their brains to search for the three most appropriate words in which they could tell the difference between the truth and the untruth. But, enough time passed and none of them could come up with an answer.
Birbal was also present in the court, but kept mum. The Emperor asked him, “What about you, Birbal? Why are you so silent?”

“Your Majesty!” Birbal politely replied, “I was giving a chance to others first. In my opinion, the right answer would be: Four fingers.”

The Emperor asked Birbal, “How is that, Birbal? Explain it to all!”

“Yes, Your Majesty, four fingers is the difference between truth and untruth. What your eyes see is truth, and what your ears hear, may be false.”

“I agree with that, but why did you say that the difference between truth and untruth is four fingers?” Akbar said.

On another occasion- One day, Emperor Akbar asked his courtiers, “What is that thing which sun and moon cannot see but others can see?” All the courtiers kept scratching their heads but could not come up with a suitable answer. Finally, Emperor Akbar asked Birbal, “Birbal, I am sure that you must have an answer for my question.” Birbal smiled and said, “It is darkness, Huzoor.”