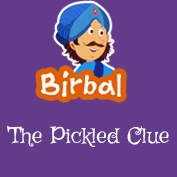 Once, a man planned to go for a pilgrimage with his family. He put all his savings in an empty pickle jar and gave it to his neighbour for safe custody. The neighbour took it and promised to take good care of his money.

When the man returned from the pilgrimage, he went to meet his neighbour and asked for his jar. The neighbour brought the jar from inside and gave it to the man. When the man opened the jar, he saw that there was just some mango pickle in the jar, instead of the money. He understood that his neighbor had replaced the money with the mango pickle. He said, “Sir, when I gave you this jar, it was full of my hard earned money, now it contains only mango pickle. How could it be so?”

The dishonest neighbor replied, “I do not know anything about your money. I did not touch the jar in your absence. Whatever you gave me, I am giving it back to you.”

The man was devastated and went to Birbal for justice. Birbal summoned the neighbor and asked him, “Where is the money that was kept in this jar?”

The neighbor replied, “Respected sir, I have already told this man that I do not know anything about his money. I did not open his jar even once! I just took it from him, kept it safely and then returned it back to him when he came back. Instead of thanking me for taking his jar of pickle, he is accusing me of theft.”

Birbal realised that the man would not easily confess his crime, so he called a cook from the royal kitchen and asked him, “My good man, could you tell us how old this pickle is?”

The cook was very experienced and after having a careful look at the pickle, he told Birbal that the pickle was not even a month old. It was definitely not made six months back, as per the claim of the neighbour.

This is how Birbal caught the neighbour’s lie and proved that he had stolen the money from the jar. The culprit was duly punished for the act of theft.